From the Sacramento Bee today …

Claiming that new rental housing is not “much needed” in Sacramento’s pricey central city, a midtown property owner is suing the city to block the construction of a six-unit apartment building proposed for a lot that has been vacant for decades.

R. Michael West filed the lawsuit against the city and its preservation commission, which gave the project the green light last month. It seeks to void the city’s approval of a three-story six-unit rental apartment building planned for the corner of 21st and T streets in midtown’s Poverty Ridge neighborhood. West owns a century-old home next to the empty lot through a family trust.

The lawsuit, filed last week in Sacramento County Superior Court, claims the project would “disrupt the architectural character” of the neighborhood and violate federal and city standards for historic areas. It alleges the building would be taller and closer to the street than other buildings in the area. It also claims the infill project should not be exempt from the California Environmental Quality Act and that it should include off-street vehicle parking, per city code, because it is not within a quarter mile of a light rail station.

The property owner worked with the city and the neighborhood to revise the design of the building, which does indeed match the character of the neighborhood and is a quarter mile from a light rail station, Matthew Sites, a city urban design staff member, told the commission. The building will be 32 feet tall, which is four feet lower than the historic rules allow, Sites said. The lot has been vacant for 60 to 80 years, Sites said.

The commission denied the appeal, finding the project followed all relevant historic and environmental regulations. Commissioner Ryan Miller recused himself and Commissioner David Lemon was absent. The denial prompted the lawsuit.

The city declined comment on the lawsuit because it has not yet been served, city spokesman Tim Swanson said.

The lawsuit comes as Sacramento is experiencing a severe housing crisis, which could worsen as a result of the coronavirus pandemic. To keep up with demand, the city of Sacramento would need to issue permits for 45,580 new housing units by 2028, according to an estimate by the Sacramento Area Council of Governments.

“The project will activate a vacant lot and provide much-needed new housing in the central city, carrying on the positive momentum of development and investment in the city,” the staff report read.

The lawsuit argues that housing is not “much needed” in the area. “There is no evidence that this statement is true, and in fact, such is not likely true,” the lawsuit reads. The lawsuit claims about half the units are not rented in a new large apartment complex, The Press at Midtown Quarter, three blocks away at 21st and Q streets.

As of this week, 39% of the units at The Press are occupied, according to data from SKK Developments. But the units have only been available since the summer – months into the coronavirus pandemic – and there are 277 units total, meaning about 108 are now occupied.

Mulugeta Ghile, part-owner of the vacant property at 21st and T streets, bought the land in 2019 and filed plans with the city to build a duplex, he said. He worked with the city and amended his plan to a six-unit building.

Ghile, who lives in the Bay Area, was planning to move to Sacramento to live in one of the units and rent the rest out. But the experience so far has been “a nightmare,” he said.

Over 100 years ago, the Bel-Vue on 8th was among the very first ‘mixed use’ buildings in downtown Sacramento, with comfortable apartments above American Cash, a ground floor grocery + hardware store.  Designed by California’s first state architect, this was a gem honored on the National Historic Register – but it’s better days were a distant memory as it slipped into decay, an abandoned wreck filled with bat, pigeons and rot.

Today it’s glowing again, full of tenants who enjoy the historic restored interior down to the claw foot tubs and  rich moldings, and the lobby fitted out like an elegant library.  Applied Architecture was proud to have assisted young developer Ali Youssefi on this adventure, completed six months after he was tragically lost to cancer.

The Bel-Vue has regained its spot among Sacramento’s treasures. 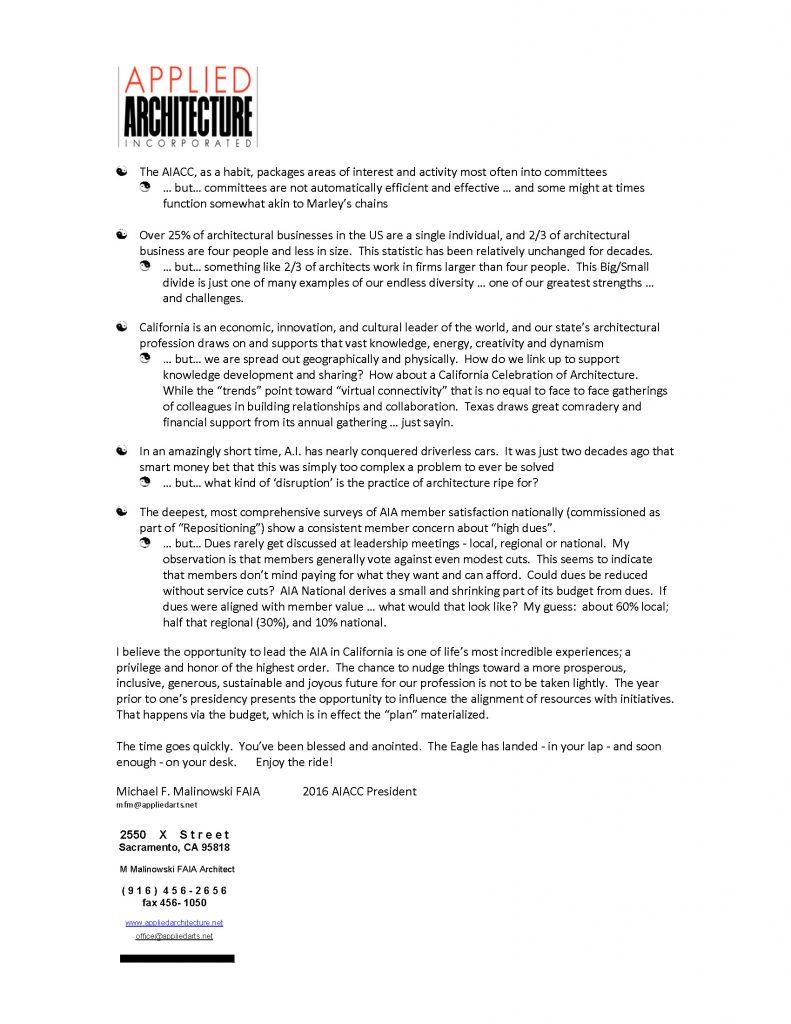 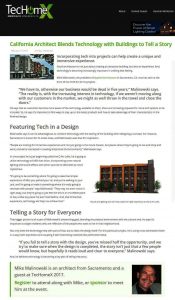 The 12th annual Code Conversation Event – founded by M.F. Malinowski AIA some 13 years ago – was another great success last evening with over 50 design professionals and building officials. There was a lively exchange of ideas, comments and forward looks, and best of all a continued development of the excellent working relationships between us all.

Article by MFMalinowski, AIACC President, in the California Building News 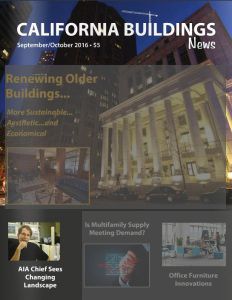 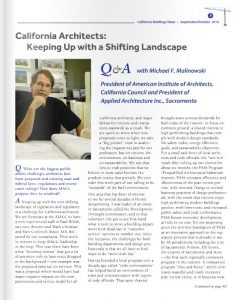